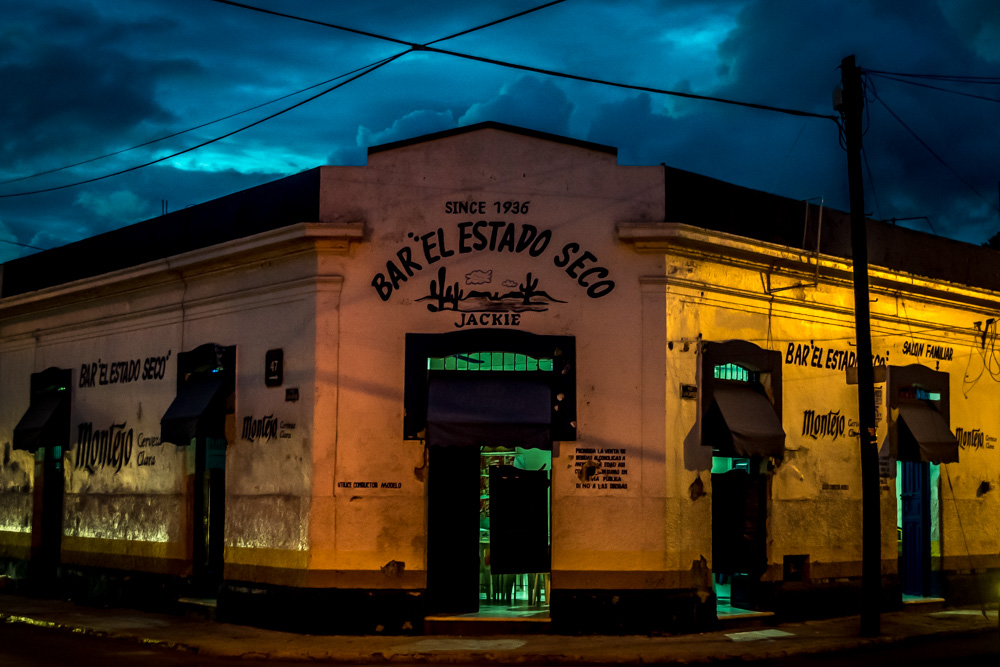 Cantinas are one of Mexico’s specialties—places where people gather to drink cold beer, eat cheap snacks and good food, if you’re lucky. They can be fancy, they can be crappy, but one thing is certain: You’ll always have a good time in them.

When I left Mexico City, I truly believed there were the best cantinas in Mexico, but then I arrived in Mérida and my whole perception changed.

“What’s so special about the cantinas in Mérida?”, you say.

Mérida has dozens of different cantinas to choose from, so I asked the locals for recommendations and after much consideration(5 minutes), I decided to start in El Gallito.

El Gallito is one of the most famous cantinas and everybody seems to love it, and I totally share that feeling.

After entering through its swinging doors, old saloon-style, I went straight to the bar, sat on one of their high stools and ordered the coldest Victoria in town.

Straight away, the cantinero gave me one and an instant later, he also brought a big brown tray with not 1 but 10 different plates with food.

That’s right! For just $23 mexican pesos, I got a free beer AND really good food:

You want better news? As long as you keep drinking, they’ll continue bringing more and better food. And this is a norm all around Mérida—and maybe even the whole state of Yucatán.

Two hours later—a little bit dizzy and full of delicious food in my stomach—I went to my next stop: El barullo de Carmela, or just La Carmela, for the friends.

This place has an authentic mexican vibe and pictures of old Mexican artists are hanging all around.

Again sitting in the bar, I ordered a big Caguama Tecate and five plates of food were brought along with it. This was going to be hard.

Luckily, there was a lot of movement in the bar, so I could focus in something else and not just drinking and eating.

The people there was friendly and very talkative, added to the fact that most of them were drunk and singing classic Mexican songs. It was a great party!

This was my last stop and the hardest to find. Maybe because I was drunk and in the border of a food coma or maybe because I didn’t have the correct address.

El Estado Seco is famous for its ‘Linces’, which I had never seen before: a huge bottle of beer, mixed with lemon, salt and the secret Lince Sauce.

I was late to the bar, so they didn’t have much food—which I didn’t mind—but they still managed to bring me really tasty snacks. Oh, boy!

I have to admit, the place was a mess, but then again, cantinas are supposed to be like this. And what’s even more important, the people was really nice again, everyone singing to The Beatles and laughing when someone didn’t know the lyrics.

After this, I couldn’t continue anymore, so I went back to the place where I was staying and slept the rest of the night. It wasn’t even 9pm, but I was more than satisfied.