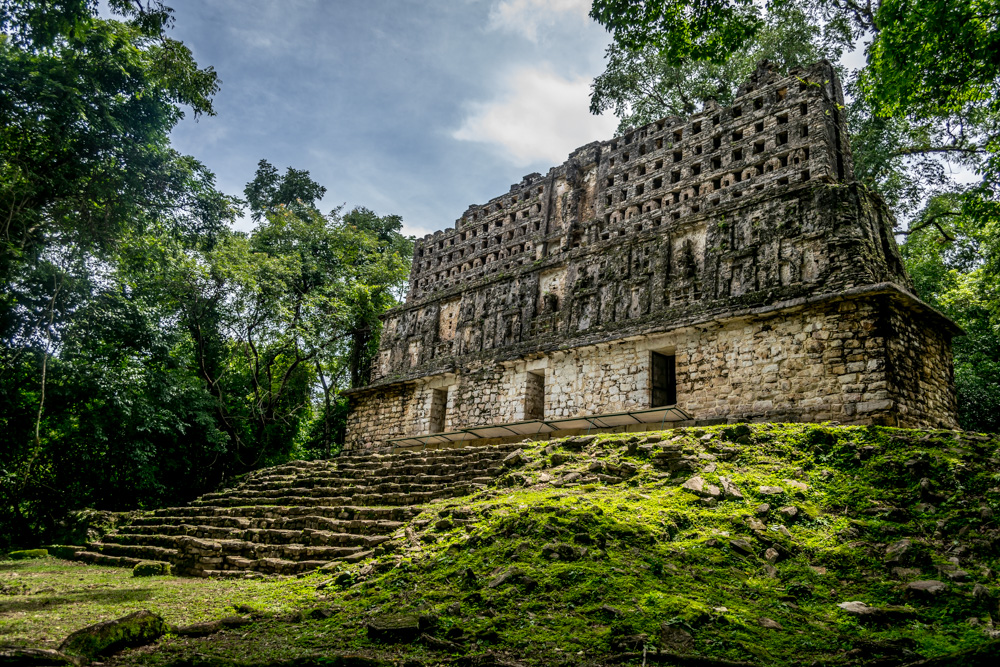 Bonampak and Yachilán are a couple of Mayan sited located in the mexican state of Chiapas, the first located in the Lacandon jungle and the latter near the border with Guatemala.

There are hundreds of tours that will take you there from Palenque and back in 1 day, but I decided to do it the hard way(the cheapest one, too) and camped in the area of Lacanjá with the lacandon family of Martín Chan Kin, a local family with a camping area in the Lacandon jungle.

To get there, I had to get a colectivo from Palenque to the junction of San Javier and then a taxi from San Javier to Lacanjá.

I have to be honest here, I was expecting a totally different thing from Lacanjá—less touristy to begin with—but I ended up having a really relaxing time there, chilling in the hammocks, reading and listening to the sound of the river.

Wish you were here!

Bonampak and its murals

I woke at 6am and a friend of Martín offered me a ride to the entrance of Bonampak around 8:30am.

Not surprisingly, I was the first tourist to enter the site and was received by a group of howler monkeys shouting at me from the top of the trees.

Bonampak is a really small site but it is know for its beautiful murals inside three of its rooms, depicting different scenes of nobles, wars, dancers and sacrifices.

After seeing all the murals, I climbed the rest of the structures and headed back to the entrance, where I got another ride, this time to the junction of San Javier.

The green rocks of Yaxchilán

From San Javier, I had to take a colectivo to the junction of Frontera Corozal and then a taxi to the entrance of the Yaxchilán park.

The only way to reach the actual site of Yaxchilán is on a boat through the Usumacinta, but since its quite expensive to get one just for one, I had to wait for a big group to arrive before leaving shore.

Luckily, I was able to join a big group after an hour of waiting.

Though it started raining only minutes after we stared the ride, the 40 minutes we took to reach Yaxchilán through the Usumacinta were quite pleasant and calmed, letting us appreciate this natural border between Mexico and Guatemala to its fullest.

Once inside the park, I was free to roam the whole place by myself and as usual, I did the tour backwards—in my experience, the best way to avoid crowds.

The whole place is amazing! Almost totally covered by trees that add a great vibe to the site.

My favorite part of it was walking through and empty path, without knowing where I was going, until I looked up to a hill and saw the back of the temple of La Gran Acrópolis silently sitting on top of it.

I was totally alone, so I was able to just sit there for a moment, take as many pictures as I liked and wonder at the marvelous scene I was witnessing.

After several minutes, I continued walking to the top of the hill and moved into the rest of the site, full of highly detailed Estelas and many interesting buildings, with the sound of the coming storm and the howler monkeys as a background.

More pictures of Bonampak and Yaxchilán

Another mural in Bonampak

Detail of an Estela in Bonampak

Front side of the Gran Acrópolis

The front stairs to the Gran Acrópolis

One of the many Estelas of Yaxchilán

The costs of Bonampak and Yaxchilán