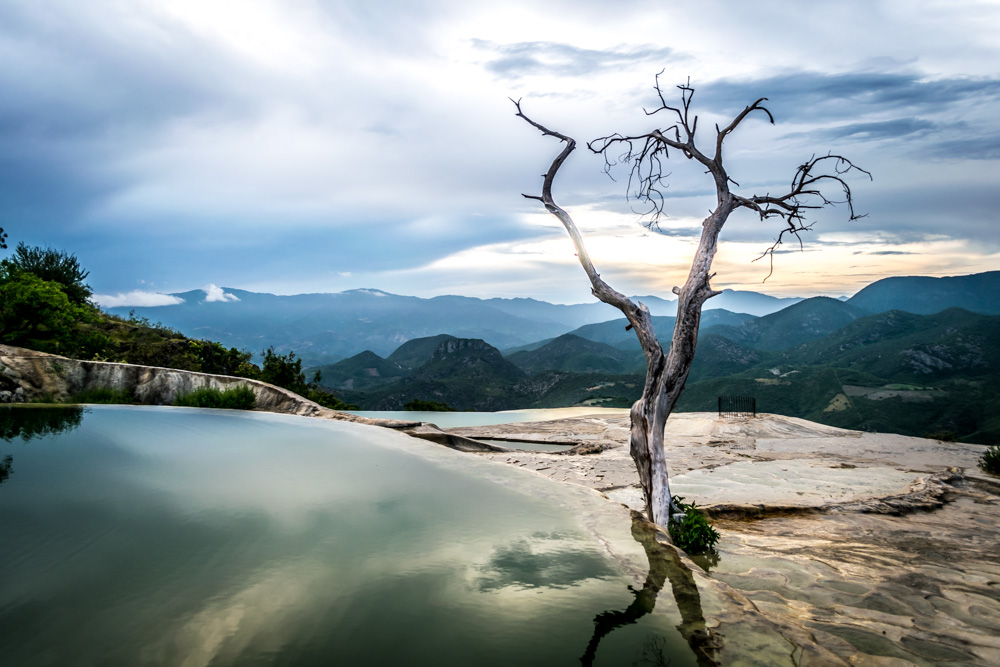 From the moment I discovered it was possible to camp at Hierve el Agua, I knew I wanted to capture a sunrise over there, showing a face of the place I have never seen before.

In order to do this, I had to travel in a colectivo taxi from Oaxaca to Mitla, where I stopped for a couple of hours to look at some of the ruins located there, confident that I would be just as easy to find another colectivo from Mitla to Hierve el Agua.

That was a mistake.

In retrospective, the delay was really worth it

Getting to Hierve el Agua

I went out of Mitla around 3pm and after waiting for a couple of hours by the side of the road, I realized it was getting too late for a colectivo to pass.

It was time to start working on a plan B to get to Hierve el Agua that same day.

The taxis were charging $200 pesos to take me there, so they were out of question. Luckily, a group of guys heard me and offered to share a cab to a nearby town from where I was able to ride a small moto taxi to a road near Hierve el Agua.

From there, I had to walk through a long dirt road, surrounded by cornfields and the sound of a couple of farms, util I reached the entrance to the complex.

A whole natural wonder for myself

I barely made it on time before the gates closed and just a few families remained in the area but just after I set up my camp, there was nobody else left. Not even someone watching the area or the crazy lunatics camping there.

There is just one other place in the world where you can find a landscape similar to Hierve el Agua, so it was a great feeling knowing that I was all alone in such a unique place, usually bursting with hundreds of locals and tourists from all around the world, trying to capture at least a small bit of this nature’s wonder.

During the night, I could hear some animals walking around and a storm growing up in the distance. I was afraid it might rain, but Tlaloc was good to me that day.

Finally, what I had come for.

Even though I woke up before 5am, the sun didn’t start to go up until well passed 7am, so I had to be really quick if I wanted to finish photographing everything before the first ride of the morning came to the park, otherwise I’d have to wait for 3 or 4 hours before the next ride and that was a no-no.

There I was, running up and down through Hierve el Agua like there was no tomorrow, trying to keep focused on the shots while also marvelling at the truly amazing spectacle of this wonder slowly coming back to life.

Fortunately, everything went as planned and before 10am I was on my way back to Oaxaca and onto my next adventure in the cold mountains of San José del Pacífico.

The costs of Hierve el Agua