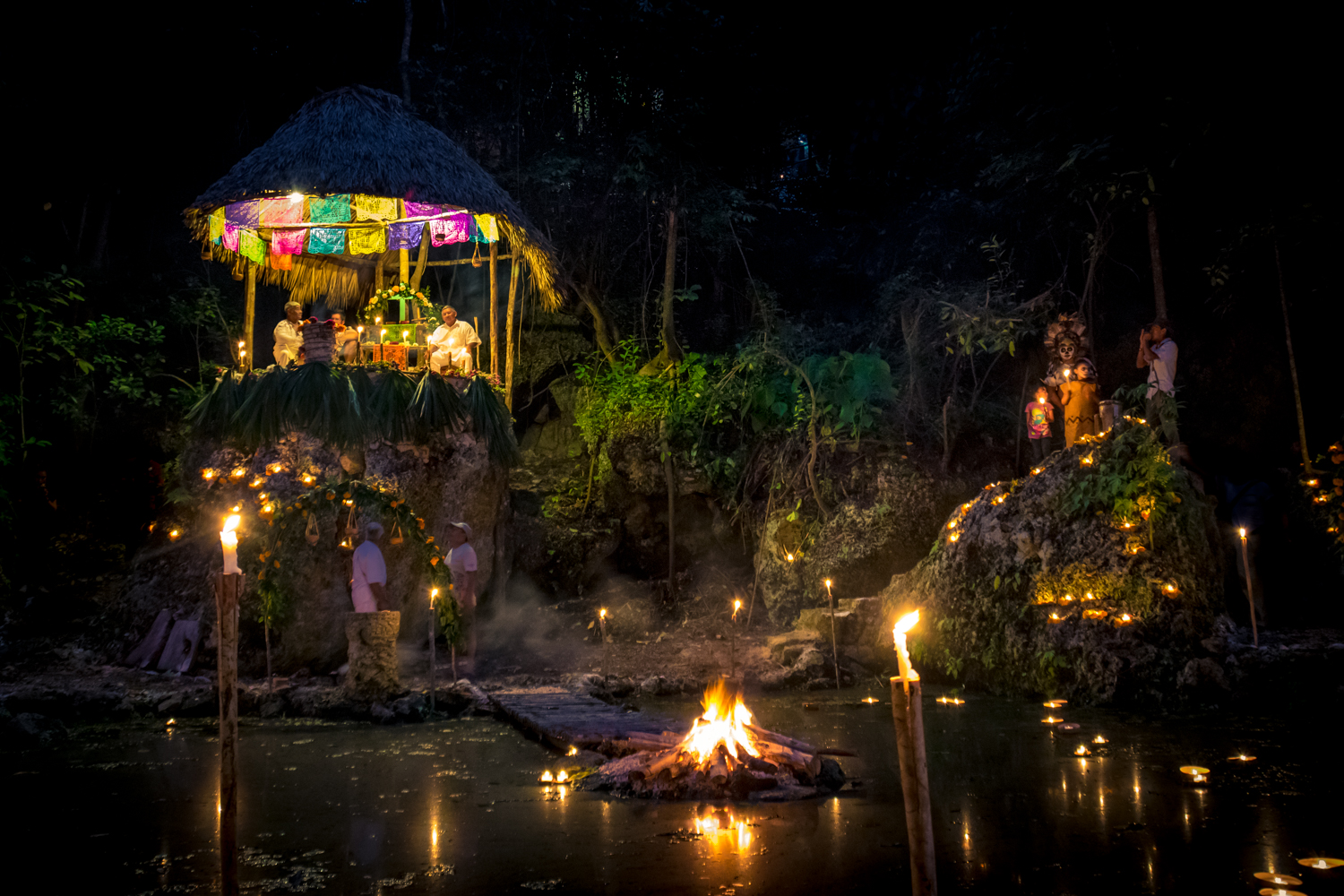 As we were walking down the stairs leading into the Cenote de La Vida—Cenote of Life—guided only by the flickering light of candles at regular intervals; the sound of drums, horns and chants were echoing all around the walls of this semi-dry cenote.

Huge trees were shadowing the main area where the rest of the ceremony was going to be held; and a dim light was the only other sign that something really special was happening behind all this secrecy.

Cerberus guarding the doors of the Underworld…

But first, what is Hanal Pixán?

‘Welcome, my brothers!’—said Ocho, a local guide I met on another adventure, was greeting us as we were parking the truck next to 3 Reyes’ main square.

After giving him the offerings of candies and pumpkins we had brought, my buddy Chucho and I were invited to wander around the plaza, where everybody was preparing their Hanal Pixán altars, the mayan variation of Day of the Dead.

A little different from all the altars I’ve seen and made during my life, I soon noticed that the main focus of the altars was food. Lots and lots of food.

They know we’re astonished and they give us a moment to let all this seep in.

Which makes sense once you know that Hanal Pixán stands for “The Feast of Souls”, in Mayan.

Once all the altars were ready, the celebration started.

Local musicians, dressed as dead Eagle Warriors, started banging the drums, playing horns and singing; while a little girl danced around them, asking the spirits to visit the living and take the offerings from the altars.

The music kept going for several minutes, while the elders of 3 Reyes worked their way to the square and as suddenly as it started, the music stopped.

I bet that hat must be really itchy

Once all eyes were focused on the elders and everyone was covered in copal smoke, the blessing of the altars begins.

They took us on a walk around the whole area, visiting each altar as they chanted and prayed for the souls of the dead, spraying water and smoke for purification.

The Sun was almost set when this part of the ritual was finished and we were invited to follow them down into the Cenote de La Vida, where the main event of Hanal Pixán would take place.

Waking up to Death

One thing I’ve learned since I started to get kind of serious about travel photography is that you have to know when to keep your camera down and focus on your personal experience.

This proved to be a real problem as soon as I saw what was happening inside the cenote.

Is this real life?

A shallow pond located in the middle of the cenote served as the main stage for the Hanal Pixán, with candles all over the place and a bonfire right in the central spot.

Musicians standing on top of a boulder, while the elders oversaw everything from a stone tower. The sound of frogs and birds resonate above our heads.

They know we’re astonished and they give us a moment to let all this seep in.

The ceremony starts and the voice of the chaman makes my ribcage vibrate. This caught me completely off-guard and I can see I’m not the only one.

Smoke goes up from a fireplace atop the main tower, we all raise our hands, repeating what the chaman is saying, asking the four Cardinal points to guide us properly in our lives.

The chaman spraying water over copal

The souls of the recently deceased hold the gates to the underworld, so the living can be with the ancient spirits of those who woke up to death a long time ago.

There’s no fear of death, for that’s not the end but the beginning of a new cycle of life. You gotta realise one cannot exist without the other.

Now, Hanal Pixán is over and it’s time for the kids to play.

Kids playing near the water after Hanal Pixán

An altar during Hanal Pixán in 3 Reyes, Yucatan

Fruit offerings for the dead

Detail of an altar during Hanal Pixán in 3 Reyes, Yucatan

Offerings for a defunct brother in 3 Reyes

Kid with his face painted for the Hanal Pixán ceremony

The young and the old come together to receive the ancient

Food offerings to the dead