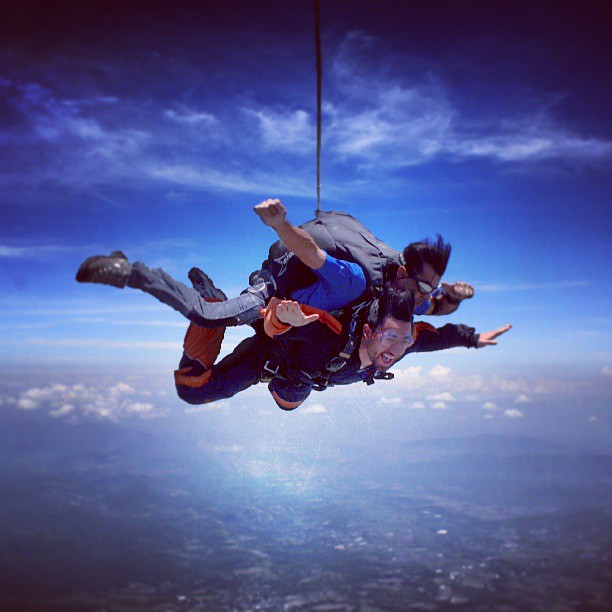 Embrace your fears! Get to know them so you can tame them.

How I deal with them

Every time I’m facing something I’m afraid of, I remember the first time I got on a roller coaster with my father, waiting in line for one of the scariest things I had seen in my life.

The anticipation and the fact that I didn’t know what to expect were driving me crazy, but once I got into the car and passed the first big drop, everything was OK.

Sure, it was an awful experience because it was a shitty ride on a small fair, but that’s not the point. The point is this: I waited there, got into the thing and came out alive!

And that’s exactly what I do now: Be conscious that the scary part is not the thing you fear but the idea you have of it.

Believe me, those fearful ideas you have are worse than reality.

Are you afraid of traveling? You’ll have more regrets later in life for not doing it. You’ll never have the money and time for it until you stop making excuses and focus on your goal.

Are you afraid of what other people might say? Ignore them! The only thing you should care about is wether you love what you’re doing or not.

Are you afraid of asking for a raise? Don’t! Stop reading this and go to your boss and ask for it, you deserve it. Come on, I’ll wait here.

Ok, maybe you didn’t do it – yet – but you have to ask yourself:

What’s the worst that can happen?

Don’t avoid your fears since that will make them bigger. Face them.

Yes, it’ll be hard at first, but once you keep facing them enough, you’ll realize it’s easier to deal with them, until one day they’re no longer a problem.

You deserve more in life than letting your fears take the big calls and stopping you from chasing your dreams. You gotta take the wheel and steer.

When I moved from my little hometown to Mexico City, back in 2011, I was basically peeing my pants as I was stepping into the plane.

I had just arrived from a two-months trip to Asia and less than $200 USD were on my bank account. No secure job, no flight back and just a mattress to share with my cousin on the floor of his apartment.

But it was something I had wanted to do for a long time and nothing was going to stop me. So I held tight, made the jump and fought my fears.

Almost 3 years later and I’m still here, having the best times of my life and already planning for the next part.

Now I’ll tell you a little secret: I’m super scared of what’s coming next, but I won’t let those fears hold me back.

And neither should you.

I’d love to hear the stories you have about dealing with fears! Tell me about them in the comments section.