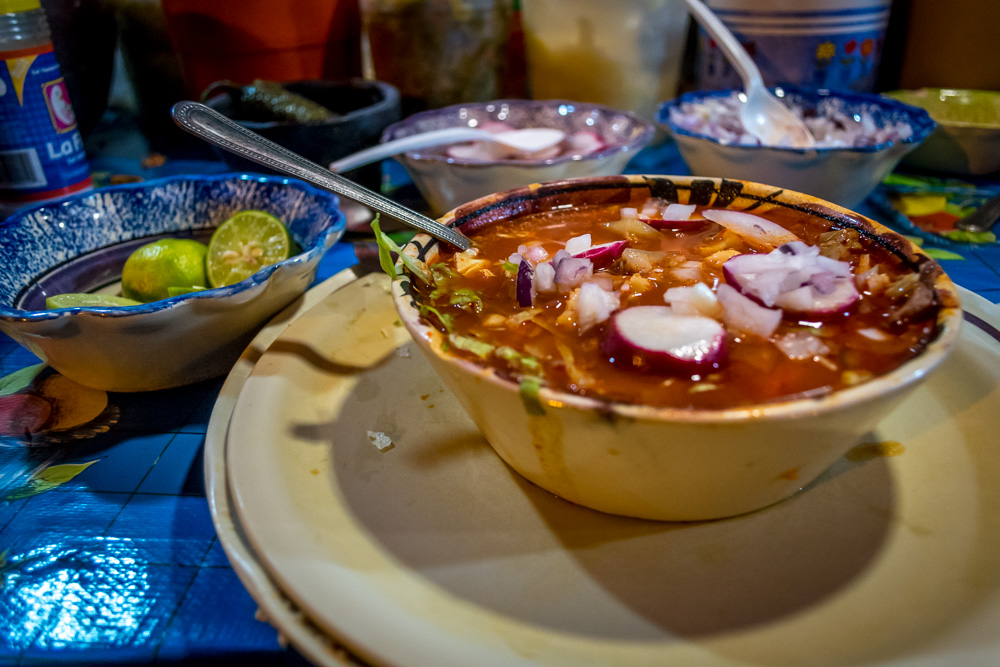 The first thing I noticed when I mentioned I was going to Guadalajara is that everyone over there is super proud of all their local food, so doing a post about most of their specialities was a no-brainer.

I arrived at ‘Guanatos’—as the locals call it—on an afternoon, and from that moment I had a little bit more than 24 hours to stuff my face with all the food they put in front of me.

The outcome was delicious.

My first stop was to eat ‘Carne en su jugo’—one of my favorite meals in the whole wide world—at the most famous restaurant in Guadalajara—Karnes Garibaldi.

It is known for being the fastest restaurant in the world, certified by the Guinness Records, and their food is top quality.

I ordered a big plate of Carne en su jugo and in less than one minute, everything was in front of me.

And son, I was not disappointed.

I took this with my phone because I was desperate to eat this!

Trust me, this stew with minced meat, beans, rice, green tomato and several other vegetables taste just like the joyful tears of baby unicorns.

As a tradition, I had only eaten buñuelos during the Christmas season, so it was funny to find you can eat them all year long in Guadalajara.

Look at those gigantic buñuelos!

Also, these are another kind of buñuelos, which crumbled down into a deep dish and then bathed with honey so you eat them like a kind of cereal.

I always like to find differences like this between the different regions of Mexico, plus it tasted really good, so it was a nice discovery.

Another of Guadalajara’s specialties is the red pozole, a hot stew with meat, lots of grains and vegetables.

After the buñuelos, we walked to a nearby corner where I ordered a Cheek Pozole, a type of pozole I’d never tried before and I dare to say that it was among the best pozoles I have ever had.

I couldn’t eat more but I finished everything as a matter of pride.

This is one of those foods that are super good or super bad and everyone kept talking about it in Guadalajara, so it was a must.

I still think of this and salivate

The next morning, my host tooke me to the 9 Esquinas, Guadalajara’s area to get the best birria in town and though most of the Birrierias were closed, we found a good place and ordered one with all its juicy goodness and it was definitely inside the “super good” team.

Again, Guadalajara had not disappointed.

Being another one of my favorite meals, I had big expectations for this one; specially since Guadalajara is the birth place of the Torta ahogada.

By the end of the second day, we started searching for a good Torta Ahogada place, not for a restaurant but for a street stall, only to find out that here, they eat this as breakfast and by noon, most of the places are closed.

So we walked for miles, asking anyone that looked like a Torta Ahogada fan and just when I was about to lose any hope of eating one before leaving, we found an open place.

We were the last clients they served and they were almost out of everything but still gave us a couple of tortas.

Sadly, it was still too late and the food was cold but tasty nonetheless.

Now I know why Guadalajara is proud of its food.

Everything I had was good and affordable, specially if you take into account the big portions they serve.

My only regret is not being earlier for the Tortas Ahogadas but, well, you learn from your mistakes.