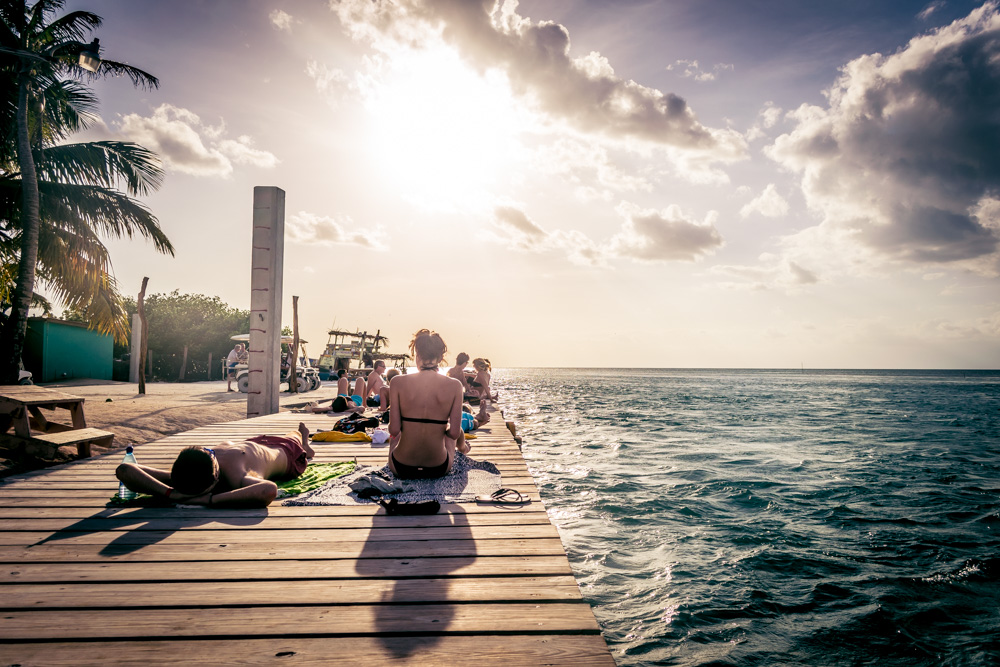 From the moment I arrived at Caye Caulker, I felt the change of speed in my body.

I still don’t know if it’s the sandy streets or the calm pace of everyone in Caye Caulker, that attracts thousands of backpackers every year, specially during the high season.

I know I had the paralysing need of taking out my shirt and shoes, sit on a lazy bench and stare into the distance.

And that’s exactly what I did every single day on the island.

The Split is a man-made channel that divides Caye Caulker in two.

The northern part almost completely undeveloped, while the southern part is where most of the locals and tourists are found.

Enjoying the last minutes of sun at The Split

This channel is the most popular part of the island, with a wooden duck where people gather for a good time and a cold beer at the bar next to the shore, while looking at the beautiful scenery.

Life on the island

After staying for a couple of nights at a party hostel and deciding that is was not for me, I moved next door to Bella’s Backpackers where I met a lot of awesome people, including the first Mexican traveler I’d met outside of Mexico.

Like in Holbox, everyone moves around Caye Caulker’s streets by walking, biking or driving cute little golf carts.

The goal of this is to maintain clean the beautiful sandy beaches and it adds to the relaxed vibe of the island.

Walking around Caye Caulker, you’ll quickly find cool bars and lots of friendly locals to talk to. The odds are you’ll end up partying with most of them, later that same day.

And if you’re lucky enough, you’ll meet one of the local alligators behind your hostel

So if you’re planning a trip to Central America, be sure not to miss Belize’s most chilled island, you’re not gonna belize it! (awful joke, I know!)