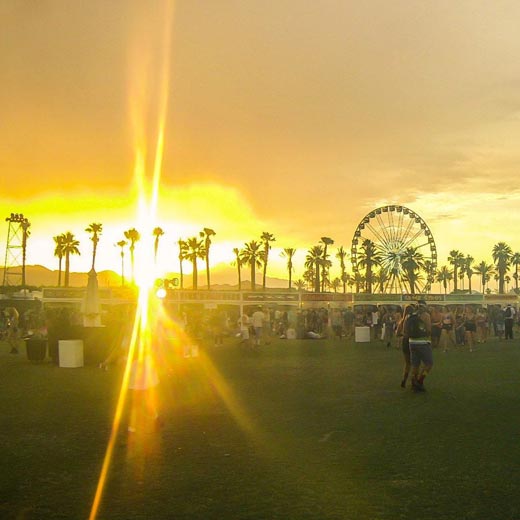 Ever since I started planning my trip to Coachella 2014 I was worried about how much money I was going to spend for the whole trip.

I’d heard about how it was basically impossible to do it on less than $100 USD per day, without including the tickets and travel expenses. And since I’ve been on a kind of tight budget for almost a year now, I’d be lying if I told you that I wasn’t a little bit worried about that.

I started searching online for blogs that would tell me exactly how much money I’d be spending. And though I found lots of lists on how to do Coachella with style($$$$$), I didn’t find something similar for the ones(like me) that need to do it as styleless as possible.

So, for all the styleless people out there that still want to go to Coachella but don’t have buckets of money to spend on fancy hotels, private jets and expensive food, here’s a detailed overview of how I did Coachella on a budget:

This is the most important thing of all, since you won’t be getting anywhere near Coachella without them.

Yes, they are quite expensive($349 + $20 for international shipping), but if you take into account that you’ll be seeing dozens of your favorite groups plus the whole experience of the festival, I dare to say this is a bargain.

Also, I believe this is the first edition in which you can buy pre-sale tickets on May with a 7-months payment plan, so instead of paying the whole price in one cut, I made a $90 deposit and 6 less than $50 payments throughout the year.

Inside the camping area, I walked anywhere I needed but I saw lots of people riding bikes all around, so that’s a great idea for moving around if you have enough space in your car because the whole area is BIG.

I was with a big group so we decided to do some groceries before going to Coachella. Each one gave around $70 bucks and bought 1 case of 36 beers per person, 6 bottles of whiskey for the whole group, water, ice and more than enough food for 3 days(fruit, tuna, energetic bars, bread, peanut butter, ham, etc.).

So how much was it in total?

There were some more things I had to pay for, like the I-94 permit needed to get to Indio($6), fast food outside of Coachella and stuff like that.

Here is the total cost of my trip, divided into 5 different groups:

Almost $400 less than I was expecting!

If we take out the cost of the tickets, it leaves us at $383 which amounts to a daily average of $76.6 per day, including the day before and after the festival.

I know it’s more than double of what you’d be spending in Southeast Asia or something similar, but this is a pretty good deal too, specially if you have almost a whole year to plan ahead and prepare yourself for one of the best musical experiences you’ll ever have.

Every day I drank like crazy on the campsite and once inside the festival I tried to drink as much water as possible instead of alcohol since it’s more expensive. I do have to confess that we snuck whiskey and a small amount of food each day, but who doesn’t, right? RIGHT?

There are water refill stations all around the area, so if you don’t mind the lines, you can bring a Camelbak or a bottle and fill it with tap water(or illegal alcohol). Also, if you collect 10 empty bottles of water, you can change them for one new fresh bottle of water.

I also ate a big breakfast each morning and a big dinner at night to avoid eating the expensive food they sold on-site.

Carpooling is a great idea to save money, too. You are helping the environment and also sharing the cost of gas, camping, groceries and awesome memories.

Have you ever been to Coachella? Tell me about your experience and your personal tips to save money!