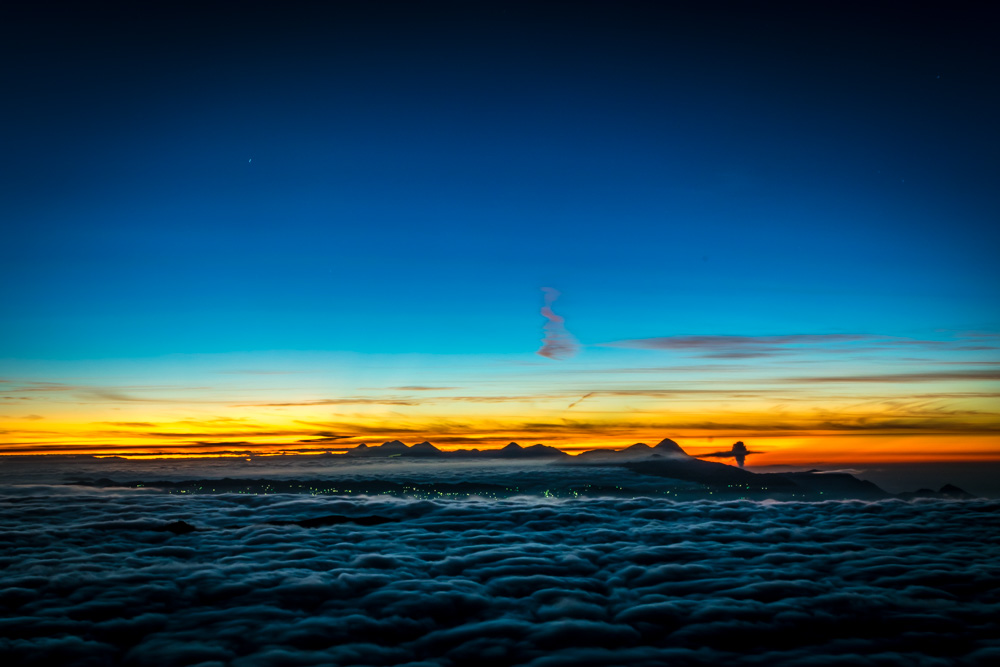 From the moment I realised Tajumulco was the highest volcano in Central America—more than 4200m high—I made it my goal to see the world from the top, an amazing hike through the Guatemalan wilderness, completely different from the hike I had done to El Mirador, but incredibly beautiful nonetheless.

On the way to the top

The hike didn’t started at the base of Tajumulco. The hike started at 4am in my hostel at Xela, from where we had to take several chicken buses, walk through bustling morning markets while carrying our huge +25 kilos backpacks, the locals staring at us in disbelief.

The perfect way of starting a hike!

We had to change chicken buses a couple of times, before reaching our destination—a small town near the skirts of the volcano.

Once in the base, we were faced with this sleeping giant, hiding behind a thick veil of clouds—Tajumulco not wanting to show its face.

The trek is not as steep as I thought, so the first couple of hours were quite pleasant and everyone was in a good mood, joking and enjoying the cold scenery around us.

But as time passed by and we got higher and higher, the temperature was dropping more and more, as well as the stamina of the group. The last couple hundred meters were a real struggle, specially for those not used to the altitude.

We finally reached the campsite, where we would spend the night before climbing the rest of Tajumulco, right before sunrise.

After setting up camp, a couple of us went up the neighbouring peak, from where we were treated with an incredible sunset above the clouds.

Back in camp, everybody’s goal was not to freeze their ass off. A bonfire was our meeting point, while we covered with thick blankets, since our jackets were not enough for the temperature.

After a massive lunch, a couple of funny stories and some rum shots, everybody was more than ready to go to the comfort of the sleeping back. I slept like a baby.

The camp below and the stars above

Looking down from the top of the world

As it happens every time I’m excited for something, I was the first one out of my tent. It didn’t took long before the whole group was more than ready to start the final trek—less than two hours before the goal.

Feet not enough rested and knees still aching from the day before, there was no looking back.

We made it to the top with enough time to enjoy the last half hour of pitch black darkness before the sunrise.

Looking down to all the towns still sleeping below us, without even knowing we were there, it gives you a sense of perspective, of how small we really are.

And as if on cue, the sun started to seep in from the west. Shy at first, it gave time for the clouds to align between us, while also letting us watch the Santiaguito volcano erupt a couple of times.

If this is not an amazing display of Mama Nature beauty, I don’t know what it is.

Just thinking of this moment gives me shivers

After watching the full sunrise, we had enough time to walk around the crater, where we marvelled not only at the massive size of Tajumulco, giving shade to all the neighbouring mountains and villages, but also at valley below us, slowly being covered by the clouds flowing down from the mountains.

Epicness all around us!