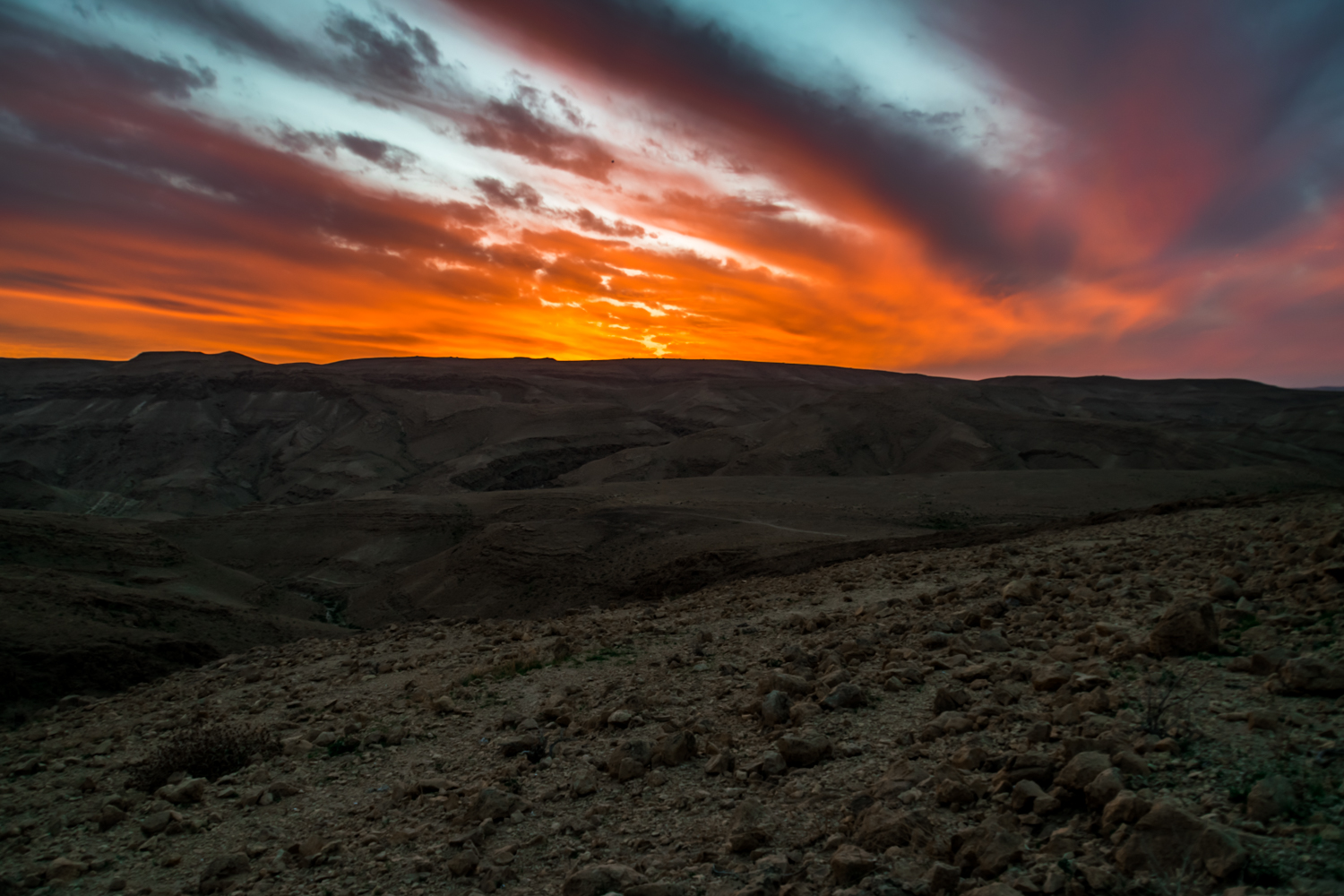 How long have you been in Israel for?”, they asked as we were going up the first ladder that would take us up to the entrance of the Wadi Tamar canyon, in the Negev Desert.

“We arrived at 1am. So around 8 hours, I guess…”—I said, with a worried smile and black under my eyes because of the lack of sleep.

“You must be a little bit crazy, my friend.”

I first heard of this hike to the Negev Desert through one of the friends I was going with to Israel.

Being a desert boy who by some unearthly reason loves walking long distances over a short period of time, this caught my interest really fast.

It is organised by Fijan Tours, a group of guys interested in showing another face of Israel through alternative travels and treks all around the country, focusing in local culture, history and—of course—politics.

It took us a couple of hours to travel all the way from Tel Aviv to the Eastern Negev, passing through a bunch of different landscapes in between, from mountains, to steppes, to cropping fields, to the Dead Sea.

We were welcomed by several signs warning us about mined fields and a type of heat I hadn’t felt since I visited my home city, last year. You know, the kind of heat that burns your eyelashes as soon as the wind touches your face.

The group was huge—specially taking into consideration that the biggest group I hiked with in Central America was no bigger than 6, including the guide—so there were bottlenecks at some points, but nothing we couldn’t manage.

Plus, that offered the opportunity of actually being able to slow down and take as many pictures as I wanted.

Once we passed the bottlenecks, the canyon opens wide and it was easy to walk around, until we reached the top of Wadi Tamar, from where is possible to watch the Dead Sea and the rest of the Negev Desert.

Into the Negev Desert

What I thought would be a short walk up and down a couple of canyons, transformed into a full-day trek through the Desert . And that’s why you read the plans of what you’re gonna do, kids.

2 hours became 4, 5 became 7 and once again I had an episode of the now classic show “Why do this, I hate it. Look at that view, this is amazing! I love my life.”

Basically a teenager, once again.

Every turn would take us into a different kind of desert landscape, huge wall covering us from both sides as we walked with our mouths open, marvelled at this pure raw rock transformed by the sheer force of water, wind and a long long time.

As we walked, Steve—one of the guides—talked to us about all the different situations that have happened in the area since god-knows-when, discussed national and international politics, talked about archaeology and basically tried to bring a little bit of light into the obscured perceptions people might have about places we don’t really know much.

To stand in the middle of the place and think of all the people, events and stories that must have happened before you—and that will happen after you—is simple mind-bending.

The cherry on top of the cake

The sun sets around 4:30 pm in Israel, so we had to get to the end of Wadi Tzafit before it got dark.

Luckily for us, we were on top of the whole valley, as the sun started setting behind the mountains.

Slowly, we convinced Ariel to wait with us while there was still enough light and, separated from the rest of the group, several of us got to enjoy a private party with the Sun, the clouds and the desert—a place I’ve definitely missed this whole time, in spite of everything.

Desert sunsets are the best

More pictures of the Negev Desert

Going into the Wadi Tamar canyon

One of the several ladders we had to climb up

Half rock, half desert

View of the Dead Sea from the top of Wadi Tamar

A group of kids we found along the way

Take a picture of me!

A couple walking down the desert

A circular rainbow appeared during one of the stops we did

Desert sunsets are the best!