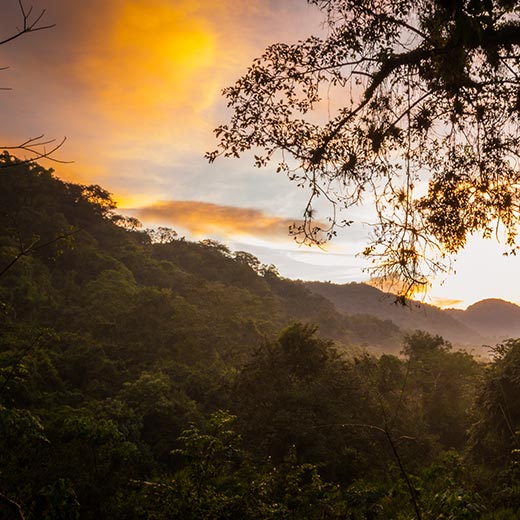 This is a small summary of my trip to La Huasteca Potosina, which is in the state of San Luis Potosí, Mexico. I’d been looking forward to this trip for weeks and I was so excited to leave Mexico City that I went to the bus station way too early and had to wait there for hours.

Oh, and I was almost arrested for filming inside the station, which is inside a Federal Zone. But that’s a story for another post.

I arrived at Xilitla’s so-called bus station, which in reality was just a small building by the side of the road. It was around 4:30am and the whole town was dead asleep, so I approached a group of 2 girls and a guy that looked as lost as me.

The girls turned out to be your not-so-regular 20-something type of girls. And we were all going the same way so, after a long wait, we hopped into a taxi that took us all to our hostel, way outside the town.

The hostel reception didn’t open until 8am so we wandered around the terrain and found a cool terrace, where we let this majestic place reveal it’s magic before our eyes as the Sun rose slowly up into the sky. A bunch of teepees in the middle of the jungle with surreal art hanging all around the place and the best vibe I’ve felt in a long time.

After we were given our room, we collapsed into our cots and slept until 1pm, then we walked to the famous surrealistic garden of Edward James where we had the first great experience of this trip.

This place was build between 1962 and 1984 by Edward James, an eccentric millionaire and artist from England, of surrealist influence and combining different architectural styles, like gothic, egiptian and mesopotamic.

You could last days inside its wonderful halls, covered by trees and orchids, before going through the same place twice. Getting up to the garden’s waterfall while you walk between twisted corridors and zoomorphic statues with leaf heads, is a real delight and a whole adventure in itself.

And only the bravest dare to reach the top of the stairways that lead into the nothingness, specially if the whole place is soaking wet.

(If you’d like to see more of this wonderful place, check out Episode 1: A surrealistic garden)

The next day, I convinced the girls to go to Tamul with me, the next part of my adventure.

We were supposed to get there by bus, but after a little talking and bargaining with our taxi driver, we hired him for the rest of the day and drove with him into the sun.

Let me tell you this: I was waiting a lot of things to happen on this trip, but finding the nicest taxi driver in Mexico was not one of them. Sure enough, Santos was THAT taxi driver. With his big smile and enthusiasm, proudly talking about the regional food he loved and the amazing things to live around here.

We reached our destination after a couple of hours of driving through the small roads of San Luis Potosí, surrounded by coffee and lychee plantations and talking about all the good and bad things about this little known mexican state.

After we arrived at the river, we got into a wooden raft and started paddling upstream, hopping down only to walk the harder parts of the stream and then reaching up the Tamul waterfall, one of the biggest I’ve seen in my life.

Since you can’t really get very near the waterfall, you stop at a big boulder at the middle of the river, where you can take pictures, relax and admire the canyon’s walls with the waterfall as a background.

But it doesn’t stop there! On the way back, we stopped at a small cave a few meters above the river and to our surprise, there was a cenote inside of it! This was the first time I’ve ever seen a real cenote and I wasn’t even near the Yucatan’s península.

We swam there for a while before getting back to the taxi and drive and drive and drive, as fast as Santos could and while the sky was getting darker and darker, in the hopes of reaching the Sótano de las Golondrinas before sunset.

We would have to try again the next day.

And because victory is for those who never surrender, the next day we made it on time. To get to the Sótano, you first have to walk down more than 500 stairs that you know are gonna hurt like hell on the way back. But trust me, everything fades away once you reach it.

At first you don’t get the sense of it because of the trees, but once you realise what you’re looking at, you notice you’ve been standing next to a more than 500 meters high hole in the middle of the jungle. Then you tie yourself into a rope and get even closer to the edge of it and thats when you see the full size of the Sótano and your breath just goes away.

We then took a front row seat to the Sotano’s real show: Thousands and thousands of birds coming back home from their daily trip to the coasts of Veracruz, going faster than your eye and doing a vertical, almost suicidal drop into the hole right beside you.

They kept coming for hours, growing in number with every minute passed.But since we didn’t want to fall into the pit, we started our climb back before all the natural light went away, still marvelled by all this great things hidden inside my own country.

What else will I find in it?

Getting to the waterfall