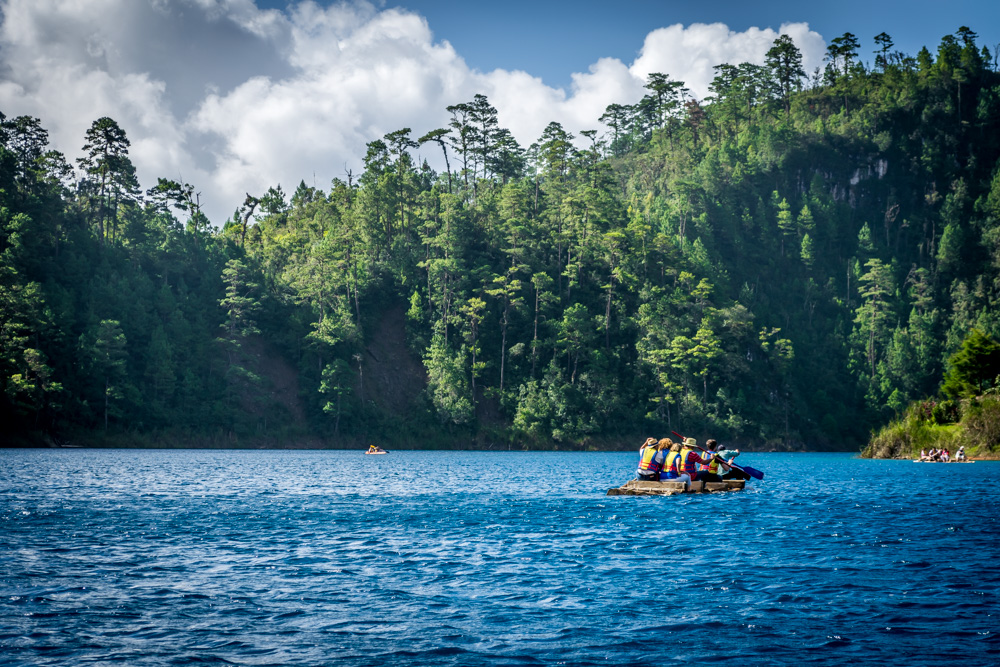 Lake Pojoj is one of the more than 59 lakes located inside the perimeter of the Lagunas de Montebello National Park, which spans across the state of Chiapas and Guatemala.

And even though I’d love to see them all, we were only able to see 7 of those lakes on that day—Pojoj being my favorite one.

There were several things that gave Lake Pojoj this distinctive and highly valued honor.

First of all, its colors. I had never seen such hues on a lake.

Its crystal clear waters, ranging from turquoise to really deep blue, mixed with the whitish of the sand, made its color palette a true delight.

Before reaching the lake’s shore, you have to go down a big big stair that lets you appreciate a panoramic view of the lake, almost totally surrounded by massive trees.

On the shore, we were received by a small group of people and several wooden rafts gently floating in the water.

Each one of these rafts was made of 5 to 6 tree trunks as a base and 3 pieces of wood on top that worked as benches for the crew.

They didn’t look very safe but hey! This is how all the awesome things in life begin.

We paid a guy for a raft and started a 20 minutes trip to the small island in the middle of Lake Pojoj.

At first, it was difficult to concentrate on paddling while the raft swayed from side to side, but as time passed, we gathered confidence and ended up racing with other rafts, trying not to fall into the lake.

The Sun was starting to set, so the colors all around were even more beautiful than before. I had a hard time trying to decide between paddling to reach faster to the island or keep my paddle down to look around and let the others do the hard work.

Luckily, the rest of my group was having the same issue, so we took turns.

The island in the middle of Lake Pojoj is called ‘Isla de las Orquídeas’ because of all the orchids cultivated in it.

It is quite small and we were lucky enough to be almost alone while we were there, like having our own personal paradise.

This place was so calm, you wouldn’t believe it. You can walk around, just sit back and relax, admiring the landscape or even jump into the cold water. Either way, you can’t have a bad time in there.

I had a great time going through the lakes of Montebello. It is a tiresome trip from San Cristobal de las Casas, but once you’re there, you’ll understand why it’s all worth the trouble.

This time, I was on a tour, so we kind of rushed through the lakes. But if you have enough time, I’d recommend going there by yourself and staying for as long as you want.

In the end, the only thing that matters is that you come here and see this wonderful place with your own eyes.