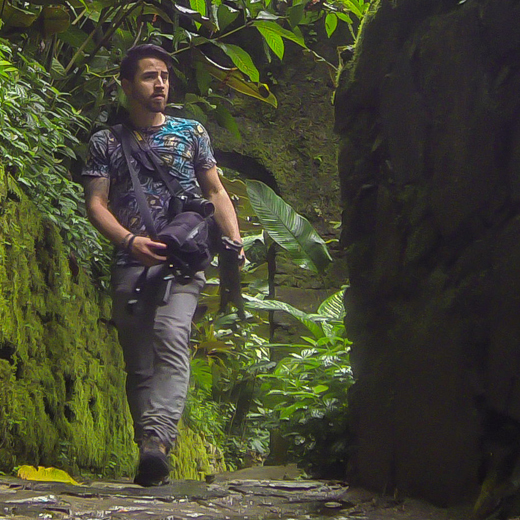 As part of the preparation process before leaving for my big trip in august, I want to make a series of smaller trips to places near Mexico City so I can practice everything I’ll be doing while traveling, but on a smaller scale.

This includes carrying the whole electronic gear I’ll be using, taking photos, filming, recording audio, editing and writing all by myself.

Here’s my verdict after my first trip to La Huasteca Potosina:

While on the road

First of all, my full photography/filming gear includes:

This means I have to make quick decisions of what I’ll be doing next. Do I want to take a picture of this or film it? Maybe both! Is the Ministabilizer needed?

It’s not a big deal if I’m alone, like when I was inside the Xilitla’s castle, since I can take my time with everything, don’t have the pressure of getting far behind a group and nobody really cares about what I’m doing.

But once I’m dealing with more people and have to keep moving, like on a hike or something similar, it gets harder to do everything and maintain the pace of everyone. So after a while, I just quit trying to go along with them.

This was something I dealt while I was going with a small group to the Tamul’s waterfall and the Sótano de las Golondrinas after that. Since I don’t want to intervene on the group’s experience, I tend to stay behind but if I want to change the camera angle or make a group shot, I have to run past them, maybe set the camera a little further away, then go back to the group without stopping them and take my shot. This is where the GoPro’s wi-fi feature comes in handy.

Since I like to shoot RAW, first I have to process and edit every photo before being able to publish it. I do this on Lightroom in just a couple of hours, depending on how many photos I have to edit.

Then comes the video editing. For this, I like to write a complete script before even touching the video. I do this with the help of the diary I write every night while traveling, this helps me keep everything ordered in my mind.

For video editing, I like to use Premiere Pro and a little bit of After Effects. I also use the Tascam DR-40 for recording the voice-over, which avoids me the pain of having to sync a lot of audio and video. For episode 1, I spent around 4 hours editing and for episode 2, around 11 hours, including the editing, the audio recording and the scripting.

My idea for the blog is to write between 2 and 3 articles per week, which could include not only full text posts but video posts, highlights and photo essays too. Every article takes me between 2 and 4 hours to write and style, if I’m inspired.

I don’t know what’s the average time spent on maintaining a blog per week, but since I don’t want to spend my whole time in front of a computer, I wouldn’t like to spend more than 20 hours a week on it, so I have to work on my times. Plus, the idea is to also do some freelance jobs while on the road, so I’ll be busy as hell.

(By the way, give me all your freelance projects!)

All in all, I feel like I did well for my first time doing something like this and I believe I’ll get better and faster on everything with a little time and practice. This is, if i don’t die of exhaustion before.

The harder problem I found was to be constantly switching my gear. More than hard, it was just a little annoying. I still have to work out a better way of doing this.

One thing’s for sure: After this, I am more motivated than ever before because now I know from experience that I’m able to do this, even though it’ll be a lot of work.