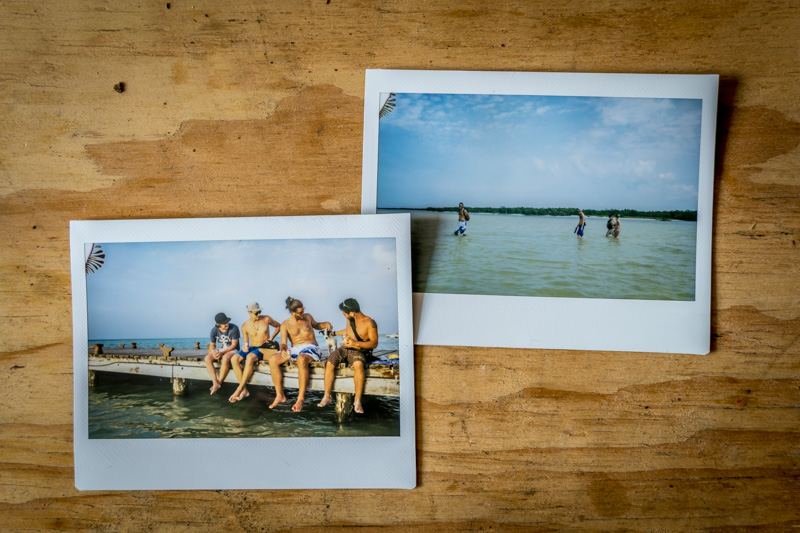 This perfect day in Holbox Island started out as any perfect day should start: With a massive breakfast and tons of laughs.

It was also the first time that Zoé, Alex, Kim, Vincent and I traveled together as a group and we couldn’t have chosen a better spot to go to than Holbo, a paradisiac island just a couple of hours north of Cancún.

We had been there for a couple of days already, but the constant rains didn’t let us do much, so as soon as we saw the sun shining bright in the sky, we decided to go on and adventure.

As soon as we saw the sun shining bright in the sky, we decided to go on and adventure

Hiking in the water

If you follow the Holbox’s shore to the west, you’ll reach the spot where the flamingoes feed, but first you have to cross a river that is supposed to have crocodiles or take a long hike through the shallow waters near the beach.

There were no australians with us at the moment, so we opted for the shallow waters, even though it took us almost twice the time to reach our goal.

Do you even flamingo, bro?

At moments, we even had to carry all of our stuff on top of our heads, because got deeper at some points. It didn’t matter, as soon as we got on shallow waters again, we started striking our best Flamingo Poses, which we rocked.

After we finally reached the flamingoes, we obviously chased them, then swam around for a while before heading back to the main area of Holbox—of course, yelling every time we discovered a ray or a horseshoe crab swimming around us.

An even better afternoon

Walking around town, we bought some beers and hit our favorite stall in Holbox, just in front of the wooden pier, where we ended up sitting after stuffing our faces with empanadas.

We rested by the pier’s edge, drinking beer, talking nonsense, laughing every 5 seconds and waiting for the sunset, until we had to run because the mosquitos were becoming unbearable.

Back in the super chilled Ida y Vuelta hostel, I started cooking chiles rellenos for everyone(even though I didn’t even know the recipe), while Vincent and some of the other guys at the hostel played music and sang. It was a true mexican party!

A couple of hours passed by without us even noticing because of all the singing and dancing around.

Tired, we crashed the hammocks for a while, the music still going in the background, where we talked and laugh a little bit more.

It was the end of a perfect day in Holbox Island!

Flamingos flying away from us

The sunset, seen from the pier

How was your perfect day? Tell me about it in the comments.