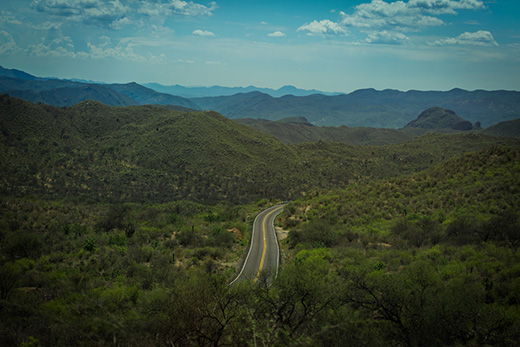 If you ask anyone what’s the first thing that comes to their mind when they think of the mexican state of Sonora, they’ll surely say one of the next few things:

Sure enough, that’s what best represents my home state, but there’s also a whole other world if you travel deeper into the northern part of the state. Up there, you’ll find not only coniferous forests, but also snow on some occasions.

But to get there, you first have to endure the dizzying roads of the Sierra Sonorense route, passing through several small towns and communities.

It’d been so long since the last time I’d been to this part of the state, that’s why I did a quick roadtrip with my family.

The road can get lost between the hills

One of these towns is the old town of Ures and it’s surrounding community.

Stablished in 1644 by the General Francisco París and with a population of less than 4,000, Ures is located at the exact center of Sonora. It is a charming and calm town with a lot of history.

Since it was saturday, I was expecting to find a lot of activity, specially in the main square of the town, but we didn’t find much to do, besides walking in the town’s plaza and looking at the beautiful architecture and abandoned buildings we came across around the area.

After a little while, we jumped back into the car and headed north of town, where we ran into roadside restaurant of El Altar, a small family-run restaurant.

There, we stuffed our faces with delicious carne con chile, machaca with vegetables, lots and lots of beans, fresh cheese and tortillas sobaqueras. You can also ask for quesadillas, tamales and a lot of other tasty dishes.

In search of the river

All satisfied and ready to go, we decided to continue driving up the road to Mazocahui and then Moctezuma, stopping from time to time to take pictures of the scenery and searching for a way to get to the river flowing down the mountains.

The roads were sometimes messy and cows were passing by, so we had to drive very slow and carefully, until finally—after more than an hour later—we found a place where we could reach a small part of the river.

By then, it was getting late, so we started our drive back to the city of Hermosillo.

Men hiding from the sizzling sun

Typical decoration of a Sonoran restaurant

If you come to Sonora, you must try the ultra spicy Chiltepín. A chilli that only grows under the shade of a tree

Have you been to these places? What do you think of them?