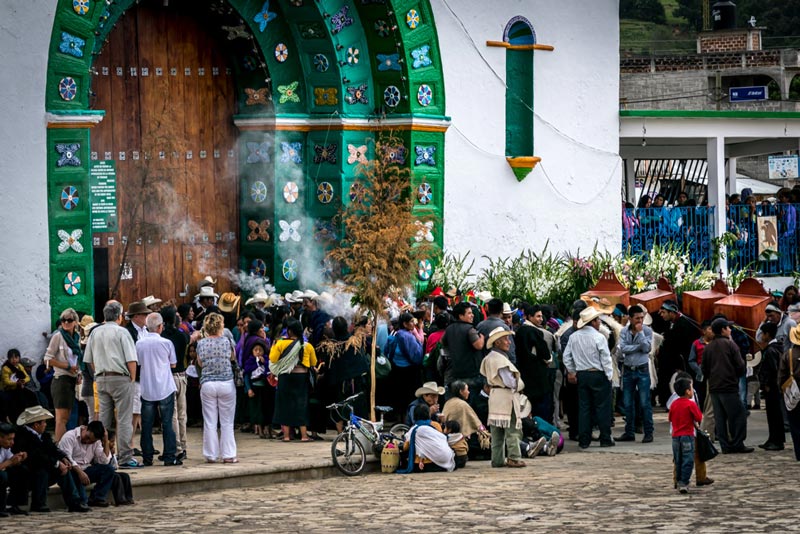 When I was in primary school, they always told us about how the Spanish missionaries had to adapt all the different indigenous religions so the natives could be converted to Catholicism, but I never truly understood how they managed to do this or how was it like. San Juan Chamula is the place where it all made sense.

Located around 15km away from San Cristóbal de las Casas, it just takes a small drive through the mountains before you reach this small agrarian town.

Here, people speak Tzotzil, one of the many dialects you’ll find around the state of Chiapas.

San Juan Chamula is the place where it all made sense

I’d heard marvellous things about the San Juan Chamula’s church, but the truth is I wasn’t too excited about seeing yet another another typical church. Nonetheless, the warnings about not being allowed to take photos inside or near the church were intriguing enough for my curiosity to kick in.

From the outside, it looks like your regular colonial-town church, except for the flower ornaments instead of religious motifs.

There was a big gathering just outside the main entrance and around the plaza, with fireworks going off every few seconds, even though it was around midday.

It was the yearly ceremony of the change of Mayordomos—the ones that’ll take care of the temple’s saints for the next year—one of the biggest honors in town.

People were carrying big boxes over their heads, full of clothing for the saints, dozens of flowers, copal, clay figurines and live animals; while musicians played traditional music.

Getting inside the church was an experience in itself, since we had cross through this mob to reach a small entrance where a sign with ‘No photos inside’ welcomed you.

One of the things I love the most about traveling is that every time you think you’ve seen everything, comes something that shows you haven’t seen anything. And that is exactly what happened to me the moment I entered the San Juan Chamula’s church.

Every time you think you’ve seen everything, comes something that shows you haven’t seen anything

With nothing blocking the view, you see the whole place in all its glory.

People sitting on the floor covered in juncia—a type of grass that comes from regional pines—praying inside small squares spread all around the main area, delimited by the grass.

Surrounded by colorful candles, they constantly drink Pox—an alcoholic beverage made from sugar cane and corn—which they use for purification.

Even if you’re not religious, the smell of copal and the music from the outside put you in a kind of trance, as you walk between the people praying to their saints, positioned in two large rows, one to the far left and one to the far right of the church.

Over the main altar, there’s a cross and images from the bible. And to accentuate the mix of cultures, there are paintings of jaguars, eagles, bulls and lions on top of them.

I stood there, trying to record everything in my memory and my little notebook, and just after I thought I was ready to go, a young mother started doing a ritual, praying for her boy’s health.

Sitting on the floor, she grabbed a black chicken from its legs and circled her boy with it while chanting in tzoltzin.

After several minutes of this, she quickly snapped the chicken’s head and started pouring its blood on a black bag before putting the chicken inside another bag.

Amazingly, I had just witnessed an animal sacrifice inside a Catholic church.

Now I was ready to go.

There’s a really good reason why they don’t let people take pictures inside the temple. It is because they believe—specially old people—that if you take a direct picture of them, you’re stealing their souls.

Now, I know there might be lots of photographs from inside the church on the internet, but since it is against their rules, I won’t promote them on this blog and neither should you.

What I will promote, though, is to experience this amazing site for yourself, with an open mind and without judging, since I highly doubt you’ll find something similar anywhere else.

Have you witnessed any other mixture of cultures? Tell me about it in the comment section