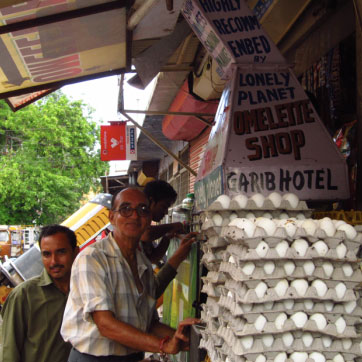 It was 2011 and it was the last part of my 2 month trip in Southeast Asia, where I traveled with an ex-girlfriend through China, Vietnam, Cambodia, Thailand and India.

We were in Jodhpur, the beautiful Blue City, with the imposing Mehrangarh Fort as a background, craving some non-indian food since our stomachs were having problems with all the curry we had eaten the week before.

We had read about the famous Omelette Man and his omelette-making skills before arriving to Jodhpur and that was the first thing we searched for after settling ourselves at our guesthouse.

It was not hard to find him since he has a small stall next to one of the gates leading into the Sardar market, with a big red OMELETTE SHOP sign on top of it and all the proofs available to let you know that he’s the real deal and not another fake Omelette Man trying to rip you off.

We sat there for almost and hour and ate a couple of his wonderful omelettes while he told us about his story, introduced us to his son and bragged about the more than 1000 eggs he cooks everyday.

After that, we continued with our tour throughout the city for a couple of days, visiting the Fort, a couple of markets and museums and we even got a chance to finally check out the Bodyguard movie everyone was talking about, with super famous Salman Kahn and Kareena Kapoor as protagonists.

And then, on our last day, we were going to take a sleeper train to Jaisalmer and had to be at the train station around 11pm.

We’d done this before, so we waited inside our guesthouse and when the hour came to go to the station, we started searching for a rickshaw, only to find the whole city dead and no one around to help us.

After a while, we reached the Sardar market again, everything closed except for the glorious Omelette Shop… and they recognized us!

The Omelette Man asked us what was our problem and after we told him, he immediately told his son to take us to the train station as fast as he could. So we hopped into their small car and rushed through the small Jodhpur’s alleys, dodging sleeping cows and laughing nervously on every sharp turn.

Needless to say, we made it on time to the train station and tried to pay for their help, but the Omelette Man’s son (we never heard his name) refused and told us it was his pleasure.

So, this is for you, Omelette Guys. I hope you’re still doing what you do best and making people happy along the way.

The Omelette Man and his son