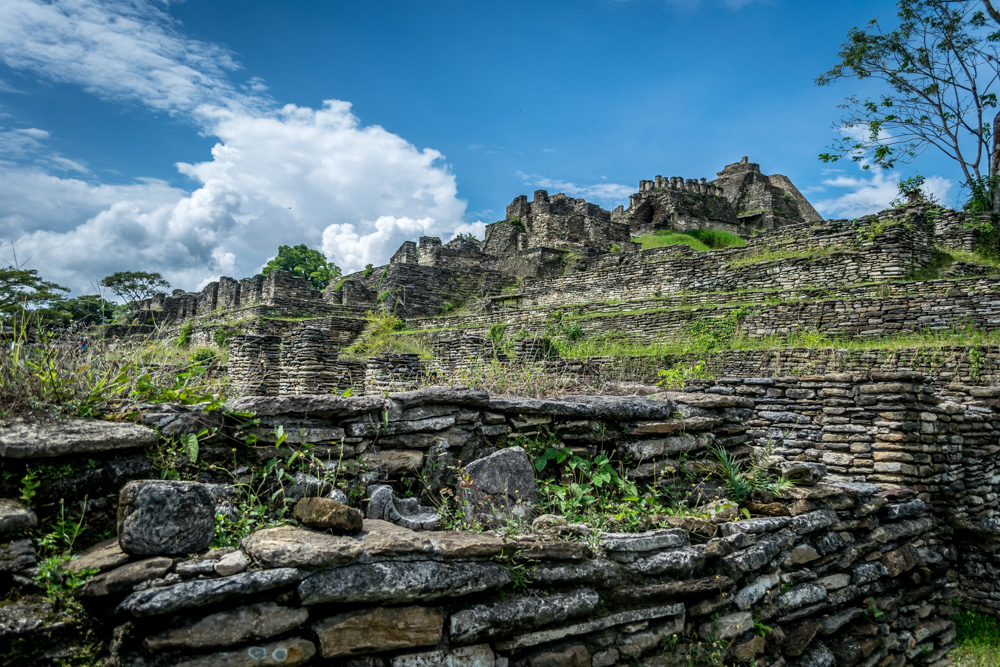 Toniná is an ancient Mayan site located in the mexican state of Chiapas, near the town of Ocosingo and in the middle of the route between the beautiful city of San Cristóbal de las Casas and Palenque—yet it is often avoided by tourists.

Even though the space it occupies is quite small, the ruins are massive—impressive murals, really big pyramids and hidden halls that lead to the Mayan underworld are just part of its appeal.

I was in Palenque for several days and I really didn’t want to miss the opportunity of visiting Toniná, so I asked Phoebe, Meggie and Rob—the australian crew I was traveling with at the moment—to come along and we hopped into a colectivo that took us straight to Ocosingo.

We arrived quite late and had to be quick, so we hired a cab to the entrance of Toniná.

Luckily, the guys at the entrance didn’t charge us(maybe because of my looks) and since there was nobody else at the area, we basically had the whole place for ourselves.

Once again, the luck of the traveler was on our side.

The first thing I noticed after we entered the site was the ancient ball game court with its sacrificial area to the side.

Though it is not it a really good shape, it has a lot of charm and the fact that you can actually see the scores on both sides makes it even more special.

We kept walking to the North and BOOM! After a few meters, there it was—the magnificent ruins of Toniná at its best.

We climbed the first four levels and found a building with three open entrances, which we entered without even blinking.

Usually these kind of entrances lead into smaller rooms but these ones were different, so it was a total surprise when we found out there were corridors inside the building—known as the Underworld Palace.

It was a small maze with no light at all, so I had to use my headlight—the only one we had—to move around the halls.

Once again, that Indiana Jones-ish feeling that I love.

It is easy to get lost in the halls, even though they’re not very long.

After we got out of the building, we wandered around the rest of the Toniná site with still nobody else in the area.

We climbed all the buildings available and marveled at the view from the top one, knowing that this was a place where important prisoners used to live before being sacrificed on the ball game.

Then it was time go back to Ocosingo before it was too late.

Inside the halls of the Underworld Palace

Toniná in all its grandeur

The australian way of climbing pyramids

It was the first time I saw this kind of architecture

The road on our walk back from Toniná

The costs of Toniná

Colectivo from Palenque to Ocosingo: $50 pesos
Colectivo from Ocosingo to Toniná: $10 pesos
Entrance fee: $48 pesos, free on Sundays for Mexicans