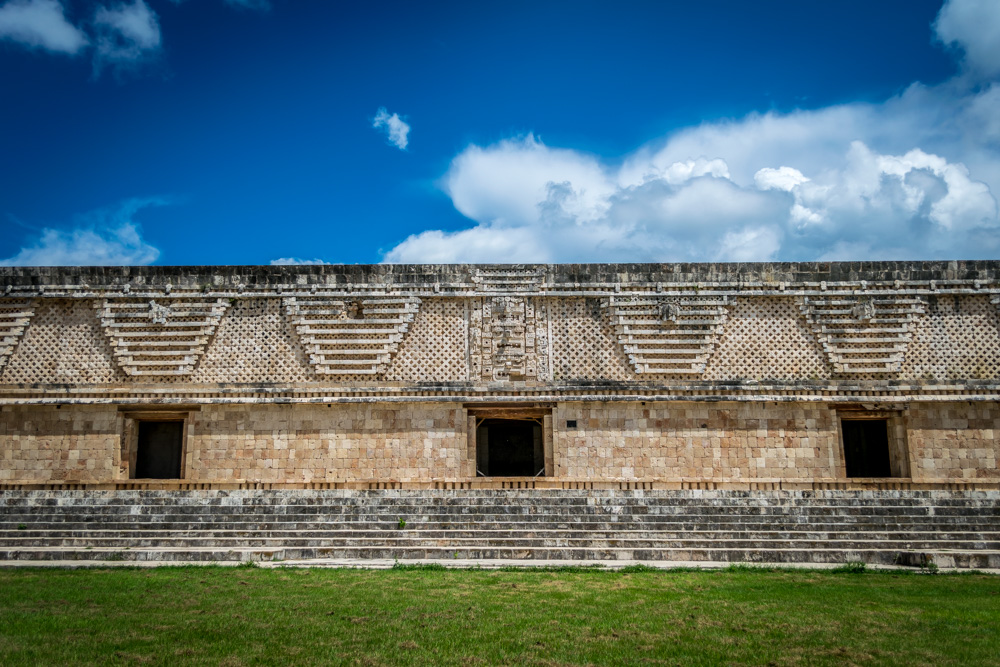 The archaeological site of Uxmal is one of the most important mayan sites. Located less than 2 hours away from Mérida, it can be easily reached by car or public transport.

It is part of the Puuc route and the Pirámide del Adivino—with its peculiar sound effects and gorgeous architecture—is the most representative building of the site, though the place is filled with other structures, rich in details and as beautiful as the pyramid.

To get there by public transport, you can catch a second class bus from the city of Mérida that’ll leave you near the main entrance of the site.

The first thing you’ll notice once you enter the main area of the site is Uxmal’s main attraction—La Pirámide del Adivino.

It is specially known for its peculiar acoustic phenomenon—every time you clap in front of it, the cavity in the middle of the stairs absorbs the echo and emits a sound resembling a Quetzal.

Click this link for a quick video I made about it, so you can better understand what I’m talking about.

After that, it’s hard not to instantly fall in love with the Uxmal ruins, specially if you take into consideration that building after building, all you see is beauty.

The entrance to the ‘Cuadrángulo de las Monjas’

Then comes the ‘Cuadrángulo de las Monjas’, a big square with highly detailed buildings and sculptures of slaves, kings and big-nosed faces.

It is quite a sight and since I had been coming all the way from Oaxaca and Chiapas, it was the first time I had seen this kind of architecture.

The ball game, the Gobernador and beyond.

Another completely unexpected feature of this site is its semi-complete ball game—the court where they used to play their ritual game.

What do I mean by a semi-complete ball game?

Throughout every mayan archaeological site, it is a common thing to find this flat fields surrounded by two similar structures facing each other, usually with some degrees of inclination or totally vertical—like in Chichén Itzá.

What is not common to find are the markers on top of these structures that served as a goal for the players, who had to pass a 2-kilo rubber ball through the small hoop to make a point.

Uxmal has one of these markers and part of the second one, which makes it quite special.

An Iguana, a complete hoop and the Gobernador as a background

Saving the best for last

After all this, comes what I consider the most beautiful part of Uxmal—the Gobernador palace, the Gran Pirámide and the Palomar structure.

The Gobernador is a big structure, again highly detailed and with a peculiar architecture, full of inclined walls and fake arches.

Just a tease of what you’ll see

From the Gran Pirámide, you’ll be able to see the whole site and if you like to pay attention to the small details, you’ll notice that on top of the structure are dozens of small detailed mosaics with images of birds, monkeys and human faces.

I stumbled into El Palomar by chance, since it was not properly shown on any map(or was it because I didn’t have any?). But as soon as I saw it, I fell in love with it.

But that story is gonna have to take another post.