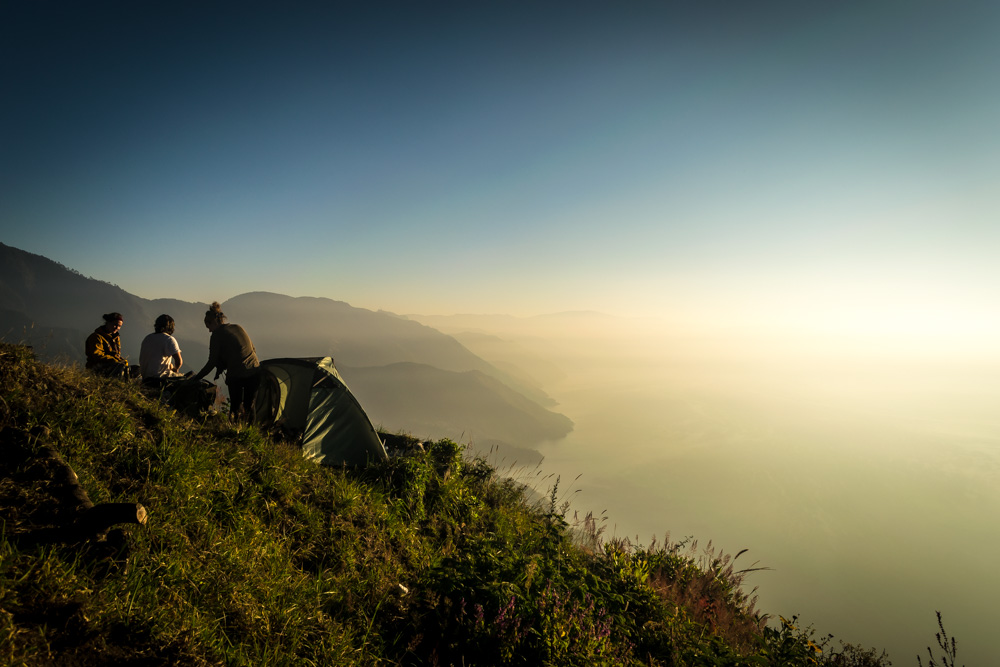 Quetzaltenango—also known as Xela—is the second biggest city in Guatemala and it is mostly known because of its beauty and its nearness to several volcanos, incluiding Tajumulco—the highest peak in Central America.

But for everyone who’s really interested in experiencing beautifully demanding hikes and also has the time for it, Xela offers this alternative trek: The 3-day trek from Xela to San Pedro La Laguna, in Lake Atitlán.

This trek is offered by almost every agency in the city and although almost everyone goes with Quetzaltrekkers, I chose Kaqchikel tours, mainly because of the price(it was cheaper) and time availability.

We started trek around 6am in Xela, where they took us to the starting point of our trek, outside one of the many towns around the city.

As soon as we started to walk, we realised how hard it was going to be this trek.

The first day consisted of 4 hours of walking uphill, 1 hour on flat-ish ground and 3 hours downhill until we reached our camping spot, in the middle of a coffee plantation beside a beautiful river. Considering that 3 of us had climbed Tajumulco the day before, it’s easy to deduce we were pretty much dead.

In spite of that, we were still able to marvel at the amazing landscapes we saw throughout this day, specially around the town of Pacorral 2(yes, it has a two on its name), where we were able to see the volcanos around Lake Atitlán—our final destination.

Day 2 – Camping on top of the Mayan Face

After a big breakfast, we resumed our hike climbing our way out of the river bed, sweaty because of the humidity and still sore from the day before.

This day was a lot, mostly because most of the path was flat after a certain distance but also because we got a good amount of rest stops on the several town we came across.

Before reaching our goal of the day, we stopped at a family’s house and had a super steamy temazcal bath, accompanied with eucalyptus leaves for the muscles, according to our host.

It was hard to leave this place, knowing that we still had a couple of hours and several hundredth meters of uphill.

When you’re hiking there’s always a point where you see or experience something that makes it worth all that pain and suffering—this time was reaching the top of the Mayan Face and seeing Lake Atitlán from the top, with all the city lights surrounding the lake and the view of fireworks from above ground-level for the first time.

The third day, although the shortest day of the trek, it was still incredible.

It started off with an astonishing sunrise seen from inside my tent on the border of a cliff, followed by another big breakfast and a 3-hour walk to San Pedro La Laguna.

Thankfully, this one was a pretty easy walk down the mountain and through several corn fields, until we got to town.

More pictures of the adventure